Features, Use-cases, and the Future

BigDL has evolved into a vibrant open-source project since Intel introduced it in December of 2016. In this article, we give details on its implementation, describe some real-world use-cases, and provide a glimpse into the new end-to-end analytics plus artificial intelligence (AI) pipelines (the Analytics Zoo platform) being built on top of Apache Spark* and BigDL. [Editor’s note: We ran the article BigDL: Optimized Deep Learning on Apache Spark in The Parallel Universe, Issue 28, describing the first version of this framework. Much has changed since then.]

Since BigDL is implemented in Apache Spark, users can easily do end-to-end data analytics, as illustrated in the five-step sequence below.

Step 4: Train the model (with the specified loss and optimization method).

BigDL provides highly scalable, distributed training using synchronous mini-batch stochastic gradient descent and data parallelism. It implements a parameter server (PS) architecture (through an all-reduce operation) directly on top of the BlockManager inside Spark. After each task computes its local gradients, instead of sending them back to the driver, it locally aggregates the gradients from all partitions within a single worker. Then the aggregated gradient on each node is sliced into chunks that are exchanged among all the cluster nodes. Each node is responsible for a specific chunk, which in essence implements a PS architecture in BigDL for parameter synchronization. Each node retrieves and aggregates gradients for the slice of the model that it’s responsible for computing. After the pairwise exchange completes, each node has its own portion of aggregated gradients, which it uses to update its own portion of weights. Then the exchange happens again to synchronize the updated weights. At the end of this procedure, each node has a copy of the updated weights. As a result, BigDL can perform highly scalable, distributed training of deep learning models (Figure 1). 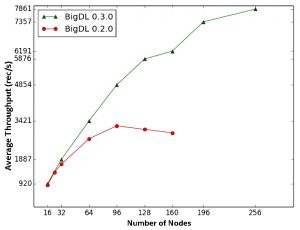 During model inference, each quantized layer:

Many of these operations can be fused in the implementation, so the quantization and dequantization.

Unlike many quantization implementations, BigDL adopts a new local quantization scheme that performs the quantization and dequantization operations in each small, local quantization window (a small sub-block, such as a patch or kernel in convolution, of the parameters or input data). As a result, BigDL can use very low-bit integers (i.e., 8-bit) in model quantization with minimal loss in accuracy (less than 0.1%), a 4x reduction in model size, and up to a 2x speedup in inference (Figure 3).

Besides being a standard Spark program, BigDL also provides support for model training and inference on a local Java* virtual machine (JVM) without Spark. This helps improve efficiency when running BigDL on a single node because there’s no overhead from parameter synchronization or task scheduling. More importantly, it becomes easier to directly integrate BigDL models (for either inference or fine tuning) with various JVM-based big data frameworks (e.g., Apache Storm, Flink, or Kafka).

In this section, we describe three typical BigDL use-cases:

JD.com is one of the largest online retailers in the world. It’s built an end-to-end object detection and image feature extraction pipeline on top of BigDL and Spark (Figure 4). The pipeline first reads hundreds of millions of pictures from a distributed database into Spark (as an RDD of pictures), and then preprocesses the RDD (including resizing, normalization, and batching) in a distributed fashion using Spark. After that, it uses BigDL to load an SSD model (pretrained in Caffe) for large-scale, distributed object detection on Spark. This generates the coordinates and scores for the detected objects in each of the pictures. It then generates the target images (by keeping the highest-scoring object as the target and cropping the original picture based on the coordinates of the target) and further preprocesses the RDD of target images (including resizing and batching). Finally, it uses BigDL to load a DeepBit model (again, pretrained in Caffe) for distributed feature extraction of the target images to generate the corresponding features. Finally, it stores the results (i.e., an RDD of extracted object features) in the Hadoop Distributed File System (HDFS).

The entire data analytics and deep learning pipeline―including data loading, partitioning, preprocessing, model inference, and storing the results―is easy to implement under a unified programming paradigm using Spark and BigDL. The end-to-end pipeline also delivers a speedup of approximately 3.83x compared to running the same solution on a GPU cluster (Figure 5), as reported by JD.3 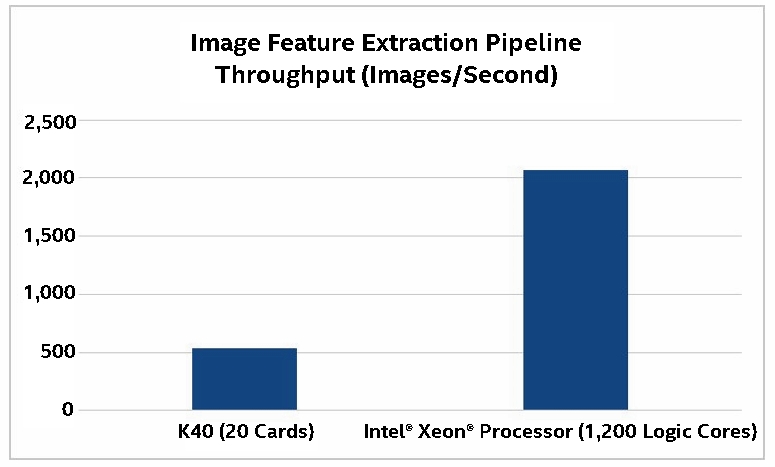 Cray has integrated BigDL into its Urika-XC* analytics software suite and built an end-to-end precipitation nowcasting (predicting short-term precipitation) workflow that includes data preparation, model training, and inference (Figure 6). First, the application reads more than a terabyte of raw radar scan data into Spark as an RDD of radar images and then converts it into an RDD of NumPy* ndarrays. It then trains a sequence-to-sequence model using a sequence of images leading up to the current time as the input with a sequence of predicted images, arbitrarily far in the future, as the output. After the model is trained, it can be used for predictions such as precipitation patterns for the next hour (Figure 7).

MLSListings Inc. is a large real estate multiple listing service (MLS) that’s been building an image-similarity-based house recommendation system on Spark and BigDL. The end-to-end workflow is implemented through transfer learning (including feature extractions and fine-tuning) to compute both the semantic and visual similarity of house photos (Figure 8). To compute the semantic similarity for the photos, the system fine-tunes the Inception v1 model pretrained on the Places dataset4 to build three new classifiers that determine whether the photo shows the house front exterior, the house style, and the number of stories.

It first loads three pretrained Inception v1 models and then appends two new layers (a fully-connected layer followed by a Softmax* layer) to each model to train the new classifiers. After training, these classifiers can be used to tag (or label) each house listing photo. To compute the visual similarity, the system uses the VGG-16 model pretrained on the Places dataset to extract the image feature for each house listing photo This is then combined with the tags generated by the classifiers and stored as a distributed table. At model serving time, the user can select a house listing photo and have the system recommend listings with similar visual characteristics (Figure 9).

While BigDL is integrated into Spark and extends its capabilities to address the challenges of big data application developers, will a library alone be enough to simplify and accelerate the deployment of ML/DL workloads on production clusters? Based on the community feedback and customer implementation, Intel has built Analytics Zoo, an end-to-end analytics plus AI platform that makes it easy to build Spark and BigDL applications by providing high-level pipeline APIs and built-in deep learning models, with reference use-cases.

Analytics Zoo provides a set of easy-to-use, high-level pipeline APIs on top of Spark and BigDL, including:

Step 4: Load an existing model (in this case, pre-trained in Caffe), remove the last few layers, and freeze the first few layers.

Analytics Zoo provides several built-in deep learning models you can use for a variety of problem types such as object detection, image classification, text classification, and recommendation.

You can easily use the Analytics Zoo Object Detection API for out-of-box inference on a large set of images.

Step 3: Use the Object Detection API for off-the-shell inference and visualization

The Big Deal about BigDL

BigDL is a work in progress, but initial experience and feedback are encouraging. Since its initial release in December of 2016, it’s received over 2,400 stars on GitHub* and enabled many users to build new analytics and deep learning applications on top of Hadoop and/or Spark clusters. The new Analytics Zoo project will make it even easier to build BigDL applications by providing an end-to-end analytics plus AI platform on top of Apache Spark and BigDL.