And indeed, this has been the case. Until recently, most developers of FPGA applications relied on tools and methods that have more in common with those used by hardware designers than by software programmers. The languages used have been hardware description languages (HDLs) such as Verilog* and VHDL*. These describe the nature of the logic rather than a flow of instructions. The compile times (called synthesis) have been very long. And an uncomfortable amount of system knowledge has been required, especially for debug and test.

All of this is now changing. Intel has created Intel® FPGA SDK for OpenCL™ technology1, which provides an alternative to HDL programming. The technology and related tools belong to a class of techniques called high-level synthesis (HLS) that enable designs to be expressed with higher levels of abstraction. Intel FPGA SDK for OpenCL technology is now in widespread use. Amazingly for longtime FPGA application developers, the performance achieved is often close to―or even better than―HDL code. But it also seems apparent that achieving this performance is often limited to developers who already know how the C-to-hardware translation works, and who have an in-house toolkit of optimization methods.

At Boston University, we’ve worked on enumerating, characterizing, and systematizing one such optimization toolkit. There are already a number of best practices for FPGA OpenCL documents. This work augments them, largely by applying additional methods well known to the high-performance computing (HPC) community2. In this methodology, we believe we’re on the right track. It’s taken decades for HPC performance programming to reach its current level of sophistication. We shouldn’t be surprised that users of Intel FPGA SDK for OpenCL technology need to follow a similar path and learning curve.

Please note that you can see more details on the work described here in references 3 and 4 at the end of the article. The first uses the FFT as a detailed case study. The second describes the empirically guided optimization framework. Also of potential interest, in related work, references 5 and 6 show how we augmented the toolflow, which can be used to test/verify design functionality and performance without generating hardware for the entire system. As a result, we can identify design bottlenecks and the impact of optimizations with greater accuracy, and thus achieve rapid turnaround. Figure 1 shows how these pieces fit together with the existing toolflow.

We’ve proposed a series of systematic and empirically guided code optimizations for OpenCL that augment current best practices and substantially improve performance. Our work characterizes and measures the impact of all these optimizations. This not only enables programmers to follow a script when optimizing their own kernels, but also opens the way for the development of autotuners to perform optimizations automatically. 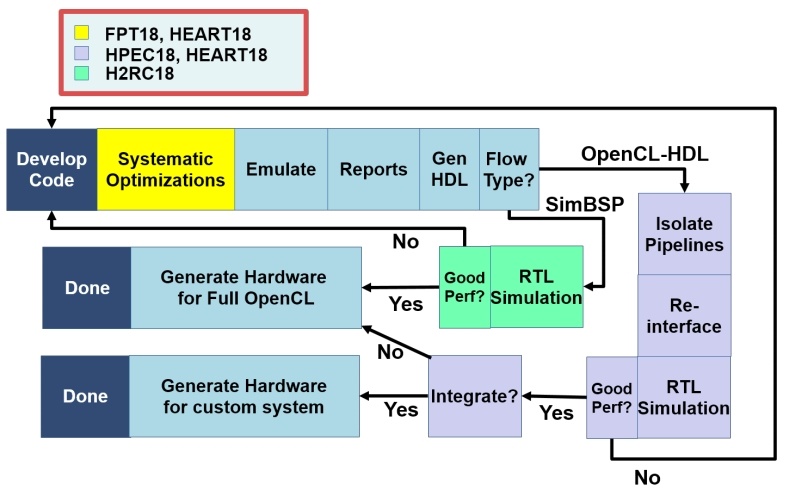 Figure 1 – The standard Intel® FPGA SDK for OpenCL™ technology toolflow is shown in light blue. Our augmentations to the standard toolflow are shown in yellow, green, and purple. This article describes the systematic optimizations.

We broadly categorize code optimizations in this domain into three sets:

IBPs are design strategies given in the Intel Best Practices Guide7, which show how to express hardware using OpenCL semantics. We separate these from UCOs and FSOs because IBPs are well-known to the FPGA OpenCL community and there have been several studies characterizing their behavior.

UCOs consist of general approaches to optimizing programs that, to a large degree, are independent of the compute platform, e.g.:

Though described (for example, in reference 2), they are largely missing from IBP documentation. FSOs consist of a number of FPGA-specific optimizations that typically augment IBPs. They’re based on:

There are seven code versions, discussed in detail in references 4 and 6, which are incrementally developed. Each version contains one or more applied optimizations. Table 1 summarizes the optimizations and their type (IBP, FSO, and/or UCO).

A popular starting point (for example, in reference 8) is kernels based on multiple work items (MWI) such as is appropriate for GPUs. Advantages of starting here include ease of exploiting data parallelism through SIMD, and compute unit replication (CUR), which is exclusive to MWI structures.

Algorithm 1 shows a V0-type kernel (based on reference 9). The core operation is to populate a matrix using known values of the first row and the first column. Each unknown entry is computed based on the values of its left, up, and up-left locations. This is achieved using loops which iterate in order over all matrix entries. The max function is implemented using “if-else” statements. In Algorithm 1, SIZE represents the dimension of blocks of matrix entries being processed.

A less intuitive, but preferred, alternative is to use (as a baseline) single-threaded CPU code. In particular, initial designs should be implemented as single work item (SWI) kernels as recommended by IBPs. SWI kernels can infer and exploit all forms of parallelism effectively, and do so in a more efficient way than MWI kernels. The CPU-like baseline code should also be optimized for cache performance. This:

Algorithm 2 shows the preferred baseline kernel. The first row and column of the matrix are Vector A and Vector B, respectively.

Given the preferred baseline code, we then apply the following commonly used IBPs:

Algorithm 3 shows the Needleman Wunsch kernel structure after we apply IBPs. Parallelism is exploited using a systolic array, with each processing element (PE) implemented in a separate kernel. Channels are used to connect PEs in a specified sequence. For each inner loop iteration, PEs compute consecutive columns within the same row. This ensures spatial locality for memory transactions. The drawback is data dependencies between kernels, which can’t be reliably broken down by the compiler since it optimizes each kernel as an individual entity. Thus, the overhead of synchronizing data paths can result in performance degradation.

In Version 3, we merge the IBP-optimized task parallel kernels and declare all compute loops within the same kernel. This is because the compiler is still able to automatically infer task parallel pipelines. Having a single kernel carries a number of advantages over the multi-kernel approach, e.g.:

Algorithm 4 shows the kernel structure for implementing the systolic array as a single kernel. The compiler can now optimize the entire computation, as opposed to individual PEs. Synchronization overhead is also reduced, since almost all computation is tied to a single loop variable (j ). Nested loops are used because, in this particular case, the cost of initiation intervals is outweighed by the reduction in resource usage. This is because the compiler was unable to infer data access patterns when loops were coalesced.

Having large variable arrays results in pipeline registers being inferred as BRAMs instead of registers, which can have significant drawbacks on the design. Since BRAMs can’t source and sink data with the same throughput as registers, barrel shifters and memory replication are required. This drastically increases resource usage. Moreover, the compiler is also unable to launch stall-free iterations of compute loops due to memory dependencies. The solution is to break large arrays corresponding to intermediate variables into smaller ones.

Algorithm 5 shows the kernel structure for inferring pipeline registers as registers. All arrays are expressed as individual variables, generated using scripts, with the exception of local storage of Vector B in “left,” which has low throughput requirements.

The OpenCL compiler doesn’t reliably break down large computations being assigned to a single variable into intermediate stages. This reduces the number of possible pipeline stages and can result in larger critical paths and data dependency stalls. Our solution is to do computations in as much detail as possible by using intermediate variables to help the compiler infer pipelines. If the logic is already optimal, these variables will be synthesized away and won’t waste resources.

Algorithm 6 shows the kernel structure after performing computations in detail with a number of intermediate variables added. The “max” function is also explicitly implemented.

We optimize conditional operations by explicitly specifying architecture states which ensure the validity of the computation. Since hardware is persistent and will always exist once synthesized, we avoid using conditional branch statements. Instead, variable values are conditionally assigned such that the output of invalid operations is not committed and hence does not impact the overall result. Algorithm 7 shows the “if-else” operations replaced with conditional assignments.

The optimizations are tested for the full OpenCL compilation flow using these benchmarks:

Table 2 provides a summary of these benchmarks, their associated dwarfs8, tested problem sizes, and applicable code versions that are developed.

Figure 2 – Impact of systematic application of the proposed optimizations to a cache-optimized CPU baseline code. In almost all cases, every subsequent code version shows increasing performance, with up to orders of magnitude better performance possible for fully-optimized

The average impact of individual optimizations is shown in Figure 3. Generally, each successive set of optimizations applied results in increasing performance. The exception is V5. This is due to higher execution times of V5 for NW and SpMV. In both cases, performing computations in as much detail as possible results in the use of conditional statements that outweigh the benefits of the optimization. Once these statements are removed in V6, the speedup increases. 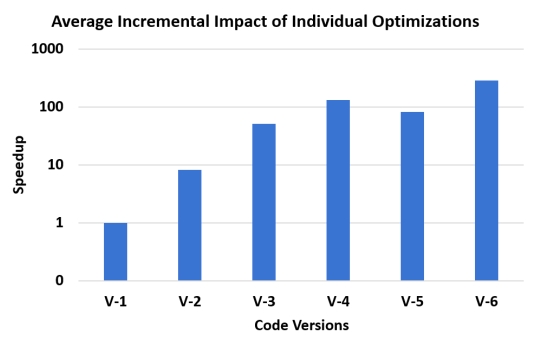 Figure 3 – Performance for different code versions, obtained by averaging the speedup of all applicable benchmarks.

To demonstrate the overall effectiveness of the approach, we compare the performance of the optimized kernels against existing CPU, GPU, Verilog, and FPGA-OpenCL implementations. Table 3 lists the references for these designs. They’re either obtained from the literature or implemented using available source code/libraries (denoted by an asterisk). Verilog FFT measurement from reference 3 has been extended to include off-chip access overhead.

Figure 4 shows the average speedup achieved over the CPU code, while Figure 5 shows the normalized execution times for all implementations. From the results, we observe that our work outperforms multicore CPU implementations by approximately 1.2x due to the performance of codes written using Intel® Math Kernel Library (Intel® MKL). We’ve also achieved an average of approximately 5x lower execution time than existing FPGA OpenCL work. The GPU speedup of 2.4x relative to our work is due to the use of a high-end GPU (Tesla* P100) compared to a midrange FPGA (Intel® Arria® 10 FPGAs). We therefore also provide an estimate of high-end FPGA performance (Stratix R 10*) using a conservative factor of 4x to account for an increase in resource only. Results show that the optimized kernels on Stratix 10 are expected to outperform GPU designs by 65%, on average.

Comparison with existing Verilog* implementations show that the OpenCL kernels are, on average, within 12% of hand-tuned HDL. This demonstrates that the optimizations are able to bridge the performance-programmability gap for FPGAs and deliver HDL-like performance using OpenCL. 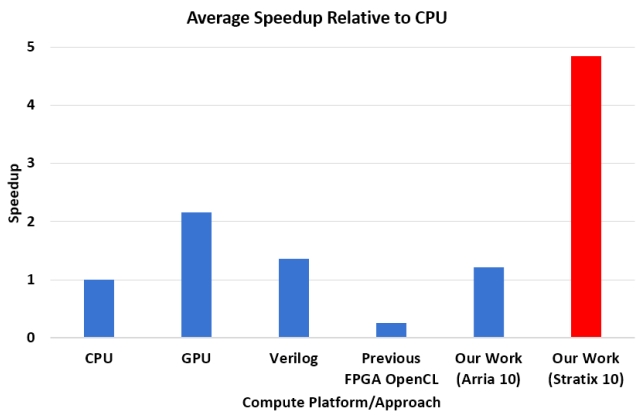 Figure 5 – Performance of our work compared to existing CPU, GPU, Verilog*, and FPGA OpenCL implementations. Our work outperforms CPU and OpenCL for most of the benchmarks. Moreover, we also achieve speedups over GPU (SpMV, PME) and Verilog (SpMV, Range Limited).

This article is from The Parallel Universe, Intel’s quarterly magazine that helps you take your software development into the future with the latest tools, tips, and training to expand your expertise. Get it >

A How-To Overview: Tap into the Power of OpenCL* Development for Windows*