OmniSci has a vision of pioneering modern hardware and software to allow for data insights at the speed of curiosity. One catalyst for this effort is today’s open data science stack, a platform for experimentation. Through our shared vision and collaboration with Intel, we’re working to advance and unify the worlds of data science with traditional analytics on modern hardware. In this article, we’ll look at the relationship between data science applications and data discovery and explain how OmniSci and Intel are working together to advance innovation in this ecosystem.

It’s clear that we now live in a world where artificial intelligence (AI) is rapidly extending human perception and intuition. Our colleagues at Intel also see this shift, and the natural progression of AI, as part of the continuum of ways for people to understand the world through data. It’s useful to think of a natural “loop” in how this understanding develops (Figure 1), going from data exploration with visual analytics tools (since there’s no match for human visual perception to quickly understand trends in data), to experimentation, where a data scientist builds models, and finally to explanation, where both visual analytics tools and machine learning methods combine to reveal key insights in a seamless workflow. 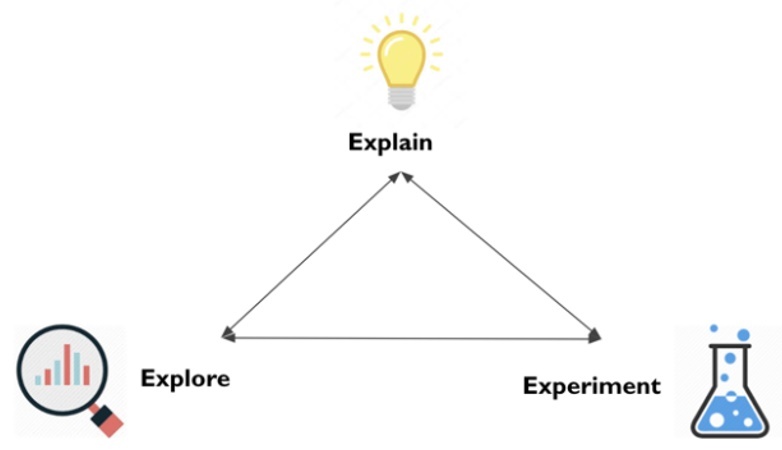 Figure 1 – The loop of understanding

These components lower the cost of curiosity and help drive interactive computing in general, and data-driven storytelling in particular. As an example, Figure 2 shows the first-ever photograph of a black hole, coming to life inside a Jupyter notebook, powered by these tools. 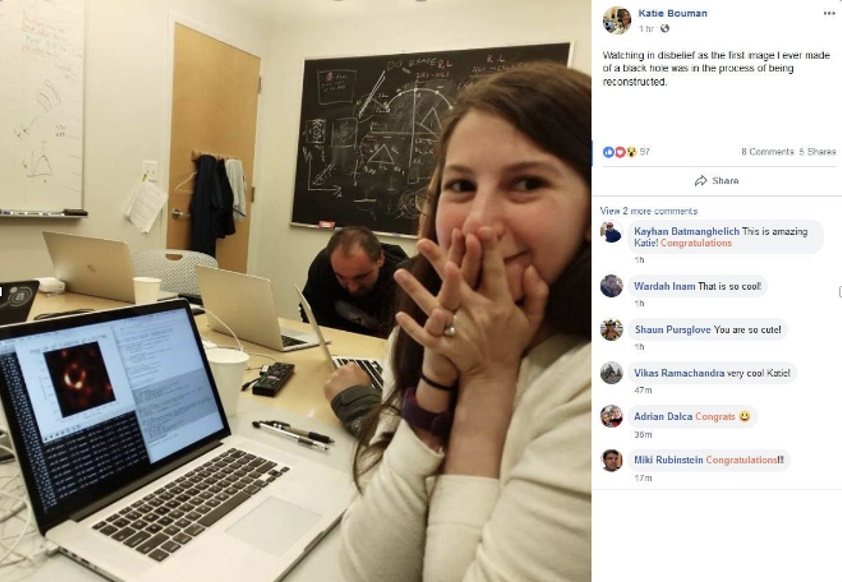 Back in 2017, when OmniSci was still known as MapD, we recognized the need to be part of this world and contribute to its growth. In-memory databases and dataframes are becoming essential technology, serving as an entry point for any type of data in the preparation, preprocessing, extraction, transformation, and loading phases of end-to-end analytics.

For a Python-powered end-to-end analytics pipeline, there are libraries, like Pandas, that have functional power but lack optimizations for Intel® architecture. This means there’s a need for an open source, performant framework that can harnesses the computing power of existing and emerging Intel® hardware. Our collaboration with Intel allows OmniSciDB* to be the basis for such a framework.

Pandas is a critical component of the PyData ecosystem, and we decided it would be counterproductive to replicate its entire API. Instead, we believe a great deal of Pandas’ value lies in its powerful, expressive way of evaluating analytic expressions on an in-memory dataframe. This is how OmniSciDB query execution works already, so the problem became one of finding (or building) an API that was familiar and “pythonic” while leveraging OmniSciDB underneath. As a next step in this process, working with Intel, we’re putting in place a common dataframe for OmniSci that allows for a scalable and performant workflow execution within the open data science ecosystem.

As it turns out, Wes McKinney, the creator of Pandas, had already started down this road with Ibis*, whose stated goal is to take the productivity that Pandas provides and adapt it to a higher level of scalability using languages such as SQL*. Ibis, as we’re discovering, is an absolute delight to use—especially paired with OmniSci’s speed and scale. The deferred expression model makes it really easy to perform complex analytics on any backend that’s accessible via SQL (and, in a nice twist, Pandas itself). By aligning on a consistent dataframe and Python bindings, the creation of a scalable workflow with OmniSci and Pandas can now become a high-performance backend with Ibis.

Figure 3 shows Ibis at work on a telematics dataset with 1.45 billion rows where we’re setting up an aggregate expression and evaluating it, producing a Pandas dataframe as a result. The expression is lazily evaluated. Ibis compiles it into a SQL query and then executes it only when needed. Also, notice that the response is close to instantaneous, even running against an OmniSci server in our data center over a VPN. 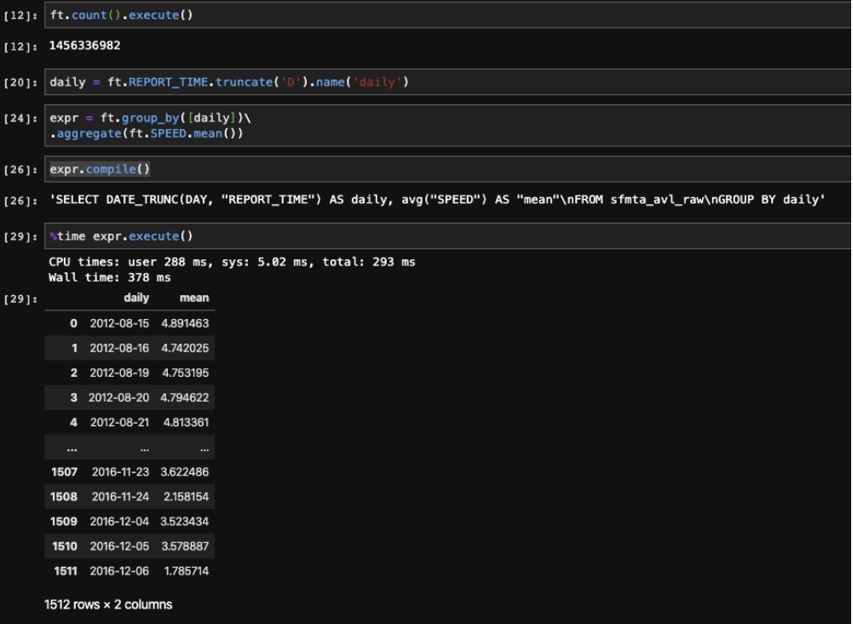 Thanks to this new Python API, we can already direct Ibis output to Apache Arrow*-based data frames memory using Pandas. Work is underway, in conjunction with Intel data scientists and machine learning experts, to continue to reduce the overhead of the interface with further acceleration on Intel® Xeon® Scalable processors with our internal result set format.

(Here’s a pretty cool aside: This Ibis- and Pandas-supported backend means you can do analysis across data sources inside a single JupyterLab notebook with one API. Simply create a connection over any of these backends and you can run Ibis expressions against them. Also, because the returned results for remote backends default to Pandas, you can wrap an Ibis connection around that Pandas dataframe. The possibilities are endless.)

There and Back Again

Finally, we’ve worked on pymapd, too, keeping up with the breathless pace of change on underlying projects (particularly Apache Arrow). A data scientist can now use all these tools and produce a dataframe that, as always, can be loaded into OmniSci via the load_table APIs in pymapd (and Ibis). The icing on the cake is OmniSci Immerse’s Visual Data Fusion (VDF) feature announced in OmniSci 4.7, which lets a user set up charts (combo and multi-layer geo charts for now) across multiple tables/sources.

Putting it All Together

A key point bears repeating: We’ve developed each one of the capabilities we’ve discussed within the respective open source project communities rather than simply forcing them to develop their own. Our work on Ibis and Pandas is available to everyone involved with those communities. OmniSciDB itself is open source, as it has been for more than two years. We’ve also invested deeply in the packaging/installation aspects so that users can easily add OmniSci to their data science workflows in multiple ways.

We took care to package everything with Docker*. Our JupyterLab image includes all the tools you need to get started. As a matter of fact, you can download and try the whole setup, including OmniSciDB, on your Mac* or Linux* laptop. We use Anaconda* for Python package management, so you can download and install OmniSciDB itself from Conda forge with conda install -c conda-forge omniscidb-cpu, and then the PyData tools for OmniSci with conda install -c conda-forge omnisci-pytools. Alternatively, you can get a prebuilt version of OmniSci from our downloads page.

Let’s give credit where it’s due. None of these new capabilities would’ve seen the light of day without the work and guidance of our open source collaborators, including those at Intel. Ultimately, we believe cutting-edge methods in data science—or, for that matter, the plumbing—are in the service of the user, not the other way around. As far as a consumer of insights is concerned, we think it’s better to have the entire assembly of tools become invisible, but ensure the insights and their explanations become obvious. Through our shared vision, we’re working to advance and unify the world of data science with traditional analytics on modern hardware.

Techniques to Accelerate NumPy & SciPy in Intel® Distribution for Python*

Introduction to Intel® Distribution for Python

Supercharge applications and speed up core computational packages with this performance-oriented distribution. Powered by Anaconda*.