In Part 1 of our Data Parallel C++ (DPC++) Data Management blog, we looked at data movement and control when targeting cross-architecture systems that include hardware accelerators—such as in the oneAPI programming model. We introduced Unified Shared Memory (USM) and buffers, both of which can help programmers achieve their portability and performance goals with DPC++ (oneAPI’s cross-architecture language). In this blog, we detail how the executions of DPC++ kernels are ordered relative to each other.

And if you missed our first blog and need a primer on DPC++, read Dive into DPC++ for an inside look at the language and its kernel-based approach.

In DPC++, ordering the execution of kernels is important because kernels may execute concurrently on one or multiple hardware accelerators, and kernel code executes asynchronously from the application’s host code. Without properly ordering the executions, one kernel may start operating on data while another kernel is still using it, leading to data corruption and hard-to-find bugs—experiences that are best avoided!

Kernels are asynchronous tasks submitted to a queue for execution on a device, and often must execute in a specific order—just like tasks in everyday life. For example, if you are hungry for dinner, you may first need to go to a grocery store to buy ingredients (task A) and then prepare a dish (task B).  When an ordering requirement exists between two tasks, we say that a dependence exists between them. In our example, since you can’t prepare a dish until after buying ingredients, there is a dependence between these two tasks.

For kernels, the dependences are usually driven by the data that a kernel is operating on (reading from or writing to). For example, any data that a kernel reads from to do its work needs to be produced and available on the device before the kernel can execute. These data dependences mean that synchronization and data transfers are required before execution of most kernels. The data transfer tasks may be explicit programmer-specified copy operations or implicit data movements performed by the DPC++ runtime. 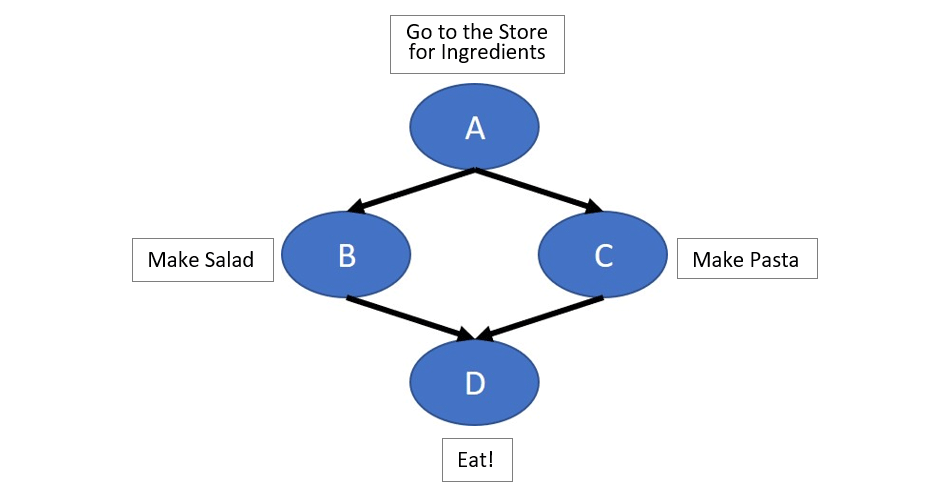 In Figure 1, task A (Go to the Store for Ingredients) must execute before tasks B (Make Salad), and C (Make Pasta). Likewise, B and C must execute before task D (Eat!). Because tasks B and C are independent, they do not have a dependence between them. This means the runtime is free to execute them in any order, or even in parallel, so long as task A has finished executing first.

Tasks may have dependences with just a subset of other tasks. When two subsets of tasks are independent, if we only specify the dependences that matter for correctness, then the runtime has maximum freedom to optimize the execution order.

In Figure 2 we add a few household chores to our evening, in the form of tasks E (Do Laundry) and F (Fold Clothes). Task E must execute before F, but tasks E and F have no dependences with A, B, C, and D. If all of these tasks are submitted to a queue for execution, there are many valid execution orderings.  For example, the tasks could be executed purely in-order from A to F, or the execution of tasks E and F could be interleaved within tasks A to D if, say, you want to take a break and do laundry after shopping. In cases where there are no dependences between tasks, such as for tasks B, C, and E, perhaps you could recruit a roommate or family member and execute the tasks in parallel!

There are two different ways you can model the execution of tasks in a queue: 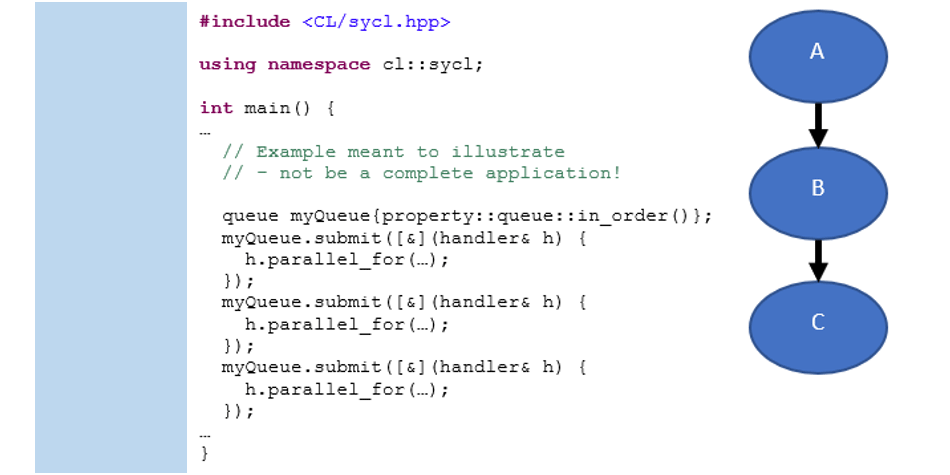 The simplest option in DPC++ is to submit tasks to an in-order queue object, as seen in Figure 3, where each task will wait for the previous tasks to be complete before starting. While in-order queues are intuitive and a good fit for many algorithms, the disadvantage is that tasks in an in-order queue will never execute in parallel, even when there are no true dependences between them. Executing tasks in parallel can help improve the performance of some algorithms, so out-of-order queues are the most commonly used in real applications.

Dependences are described via a command group, which includes both the task itself and its dependences. Command groups are typically written as C++ lambdas to keep the code brief and are passed as arguments to the submit() method of a queue object. Broadly speaking, the dependences may be represented as:

The event mechanism explicitly adds dependences between two tasks in a graph by making one task depend on the completion of another, where completion is represented by an event object. It is most relevant for tasks that operate on USM allocations, which is referenced through pointers instead of accessors. To explicitly add a dependence between tasks, use the depends_on() method that accepts either a single event or a vector of events. The depends_on() method informs the runtime that the command group requires the specified events to complete before the task may execute. Figure 4 shows an example of how depends_on() orders tasks: Figure 4 also shows a helpful technique for debugging: To serialize parts of a graph, you can also synchronize through the host by explicitly calling the wait() method on the event, which forces the runtime to wait for the task to complete before host program execution continues. Waiting on the host can simplify debugging of applications, but it also constraints the asynchronous execution of tasks by coupling them with the host program’s execution, so it is not recommended as a general-purpose solution in high-performance code. Similarly, you could call wait() on a queue object to block execution on the host until all enqueued tasks in the queue have completed.

Most code should not use wait() or similar constructs to order task executions but should rely on either the depends_on() mechanism or accessors (described next), which allow the DPC++ runtime to manage the details of task ordering and sequencing for you.

Data dependences are expressed to the runtime through accessors. The order that you create accessors, in the program order, creates an implicit ordering of the tasks using those accessors that the runtime manages for you. An example is shown in Figures 6 and 7. 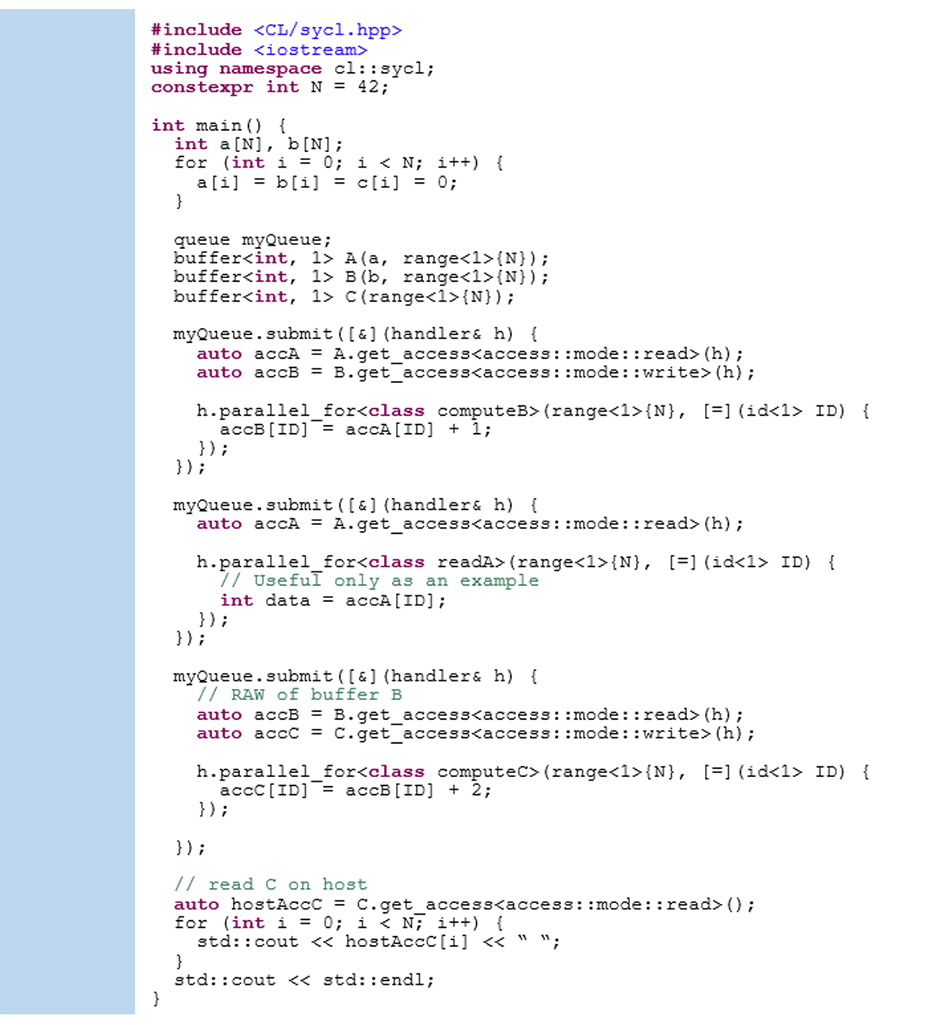 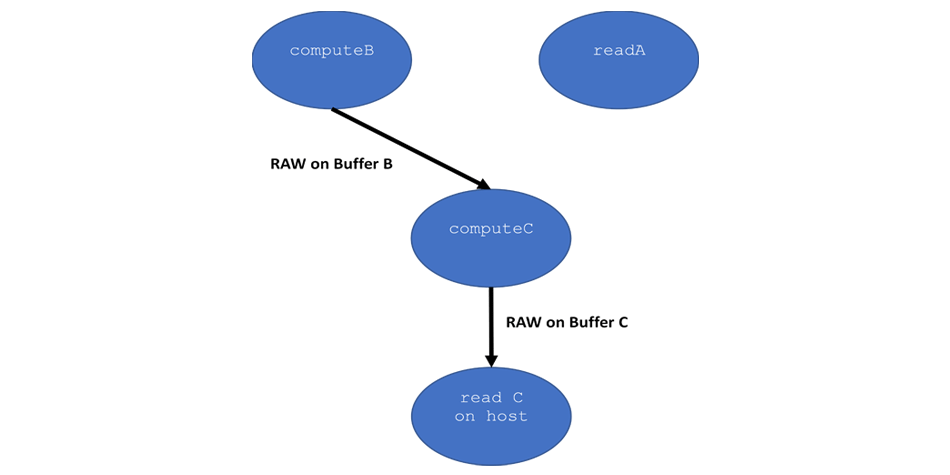 In Figures 6 and 7, three kernels execute: computeB, readA, and computeC, and then the final result is read on the host. The command group for kernel computeB creates two accessors, accA and accB. Kernel computeB reads from buffer A through accA and writes to buffer B through accB. The accessors give the DPC++ runtime the information that it needs to order the executions of the kernels correctly, and on when it needs to move data to specific memories (to be accessible by kernels running on different devices). For example, before readA or computeB start to execute, buffer A must be copied from the host to the device and made available for use by the kernels.

The readA kernel creates a read-only accessor for buffer A, which creates a Read-after-Read (RAR) dependence because kernel readA is submitted after kernel computeB. RAR dependencies do not place extra restrictions on the runtime, and the kernels can therefore execute in any order (including at the same time) depending on what the runtime determines will be most efficient.

Finally the program also creates a RAW dependence on buffer C between kernel computeC and the host, because the host needs to access buffer C after the kernel finishes. This forces the runtime to copy buffer C back to the host after computeC completes execution, but the key is that the runtime does all of this for you automatically behind the scenes! If you use accessors, data movement and scheduling of kernel executions for correctness are automatic!

We know that many DPC++ users are actually OpenCL and SYCL gurus, and we have exciting news to share ahead. We’re working on integrating DPC++ extensions such as USM back into the Khronos standards. We’ll provide more details soon.

DPC++ Part 1: An Introduction to the New Programming Model