Meet the Intel-Optimized Frameworks that Make It Easier

When you’re developing AI applications, you need highly optimized deep learning models that enable an app to run wherever it’s needed and on any kind of device—from the edge to the cloud. But optimizing deep learning models for higher performance on CPUs presents a number of challenges, like:

These challenges aren’t significantly different from those you see when you’re optimizing other performance-sensitive applications—and developers and data scientists can find a wealth of deep learning frameworks to help address them. Intel has developed a number of optimized deep learning primitives that you can use inside these popular deep learning frameworks to ensure you’re implementing common building blocks efficiently through libraries like Intel® Math Kernel Library (Intel® MKL).

In this article, we’ll look at the performance of Intel’s optimizations for frameworks like Caffe*, TensorFlow*, and MXNet*. We’ll also introduce the type of accelerations available on these frameworks via the Intel® Math Kernel Library for Deep Neural Networks (Intel® MKL-DNN) and show you how to acquire and/or build these framework packages with Intel’s accelerations―so you can take advantage of accelerated CPU training and inference execution with no code changes (Figures 1 and 2).

Intel MKL-DNN is an open-source performance library that accelerates deep learning applications and frameworks on Intel® architectures. Intel MKL-DNN contains vectorized and threaded building blocks that you can use to implement deep neural networks (DNN) with C and C++ interfaces (Table 1).

Also, 2-in-1 and 3-in-1 fused versions of layer primitives are available if a framework developer wants to fully leverage the power of the library. The fused layers allow for Intel MKL-DNN math to run concurrently on downstream layers if the relevant upstream computations are completed for that piece of the data/image frame. A fused primitive will include compute-intensive operations along with bandwidth-limited ops. 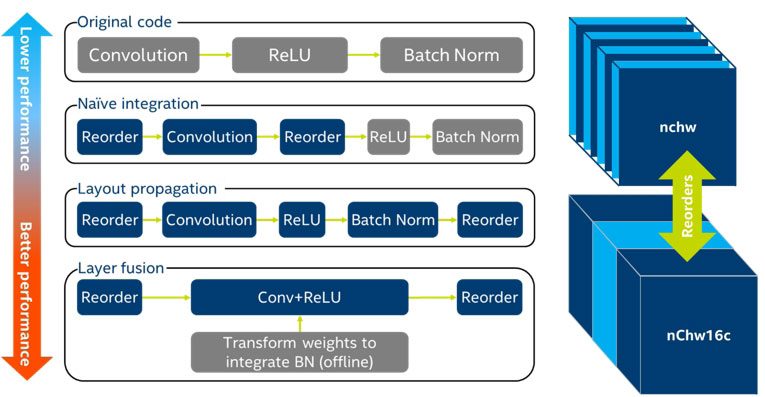 Intel MKL-DNN is distributed in source code form under the Apache* License Version 2.0. See the Readme for up-to-date build instructions for Linux*, macOS*, and Windows*.

The VTUNEROOT flag is required for integration with Intel® VTune™ Amplifier. The Readme explains how to use this flag.

Current distribution channels are PIP, Anaconda, Docker, and build from source. See the Intel® Optimization for TensorFlow* Installation Guide for detailed instructions for all channels.

Intel has a tutorial describing how to use Intel® Optimization for Caffe* to build Caffe optimized for Intel architecture, train deep network models using one or more compute nodes, and deploy networks.

Intel has a tutorial explaining Intel® Optimization for Apache* MXNet.

Now let’s consider TensorFlow runtime settings for best performance―specifically, convolutional neural network (CNN) inference. The concepts can be applied to other frameworks accelerated with Intel MKL-DNN and other use cases. However, some empirical testing will be required. Where necessary, we’ll give different recommendations for real-time inference (RTI) with batch size of 1 and maximum throughput (MxT) with tunable batch size.

These runtime options heavily affect TensorFlow performance. Understanding them will help you get the best performance out of Intel’s optimizations. BKMs differ for MxT and RTI. The runtime options are: {intra|inter}_op_parallelism_threads and data layout.

The inter_op_parallelism_threads environment variable controls parallelism among independent operations. Since these operations are not relevant to each other, TensorFlow will try to run them concurrently in the thread pool, which contains inter_op_parallelism_threads threads. To minimize effects that will be brought to intra_op_parallelsim_threads threads, this environment variable is recommended to be set to the number of sockets where you want the code to run. For the Intel Optimization of TensorFlow, we recommend keeping the entire execution on a single socket.

In modern Intel architectures, efficient use of cache and memory greatly impacts overall performance. A good memory access pattern minimizes the performance cost of accessing data in memory. To achieve this, it’s important to consider how data is stored and accessed. This is usually referred as data layout. It describes how multidimensional arrays are stored linearly in the memory address space.

In most cases, data layout is represented by four letters for a two-dimensional image.

The order of these four letters indicates how pixel data are stored in 1-d memory space. For instance, NCHW indicates pixel data are stored in width-wise first, then height-wise, then channel-wise, and finally batch-wise (Figure 4). The data is then accessed from left to right with channels-first indexing. NCHW is the recommended data layout for Intel MKL-DNN because this is an efficient layout for the CPU. TensorFlow uses NHWC as the default data layout, but it also supports NCHW.

Running on a NUMA-enabled machine brings with it special considerations. NUMA, or non-uniform memory access, is a memory layout design used in data center machines meant to take advantage of locality of memory in multi-socket machines with multiple memory controllers and blocks. The Intel Optimization for TensorFlow runs best when confining both the execution and memory usage to a single NUMA node.

The library takes advantage of SIMD instructions through vectorization, as well as multiple cores through multithreading. Vectorization effectively utilizes cache and the latest instruction sets. On modern Intel processors, a single core can perform up to two fused multiply and add (FMA) operations on 16 singleprecision or 64 int8 numbers per cycle. Moreover, the technique of multi-threading helps in performing multiple independent operations simultaneously. Since deep learning tasks are often independent, getting available cores working in parallel is an obvious choice to boost performance.

To achieve the best possible CPU utilization, Intel MKL-DNN may use hardware-specific buffer layouts for compute-intensive operations, including convolution and inner product. All the other operations will run on the buffers in hardware-specific layouts or common layouts used by frameworks.

KMP_AFFINITY is used to restrict execution of certain threads to a subset of the physical processing units in a multiprocessor computer. Set this environment variable as follows:

We’ll use the recommended setting of KMP_AFFINITY as an example to explain basic content of this environment variable:

The modifier is granularity=fine,verbose. The word fine causes each OpenMP thread to be bound to a single thread context, and verbose prints messages concerning the supported affinity, e.g.,

The advantage of this setting is that consecutive threads are bound close together so that communication overhead, cache line invalidation overhead, and page thrashing are minimized. It’s desirable to avoid binding multiple threads to the same core and leaving other cores not utilized. For more detailed description of KMP_AFFINITY, see the Intel® C++ Compiler Developer Guide and Reference.

This environment variable sets the time, in milliseconds, that a thread should wait after completing the execution of a parallel region before going to sleep. Default value is 200 ms.

After completing the execution of a parallel region, threads wait for new parallel work to become available. After a certain period of time has elapsed, they stop waiting and sleep. Sleeping allows the threads to be used, until more parallel work becomes available, by non-OpenMP threaded code that may execute between parallel regions, or by other applications. A small KMP_BLOCKTIME value may offer better overall performance if the application contains non-OpenMP threaded code that executes between parallel regions. A larger KMP_BLOCKTIME value may be more appropriate if threads are to be reserved solely for OpenMP execution, but may penalize other concurrently-running OpenMP or threaded applications. The suggested setting is 0 for CNN-based models.

Start using Intel® optimized frameworks to accelerate your deep learning workloads on the CPU today. Check out our helpful resources on www.intel.ai and get support from the Intel® AI Developer Forum. Also, visit the new Intel® AI Model Zoo for solution-oriented resources for your accelerated TensorFlow* projects. Use these resources and you can have confidence that you’re using your CPU resources to their fullest capability.

JD Speeds Up Image Analysis By Replacing GPUs with CPUs

Accelerate deep learning frameworks on Intel® architecture with these highly vectorized and threaded building blocks for implementing CNNs with C/C++...