Despite the evolution of computers since the 1960s, hard disks have consistently remained the most conventional and viable way to store large amounts of data. But although they offer large capacity and durability, they have several shortcomings. Hard disks have low bandwidth and high latency, increasing the amount of time the processor has to wait for data to be transferred from disk to DRAM. Also, hard disks store data as a stream of bytes, leading to additional overhead from serialization and deserialization. As a result, disk IO presents a major challenge for many resource-intensive software applications that require data persistence, such as a database.

The ideal solution would be to store the data in memory, but DRAM can’t provide sufficient capacity and durability at an affordable cost. Persistent memory answers this challenge by combining the best of both worlds (Figure 1). 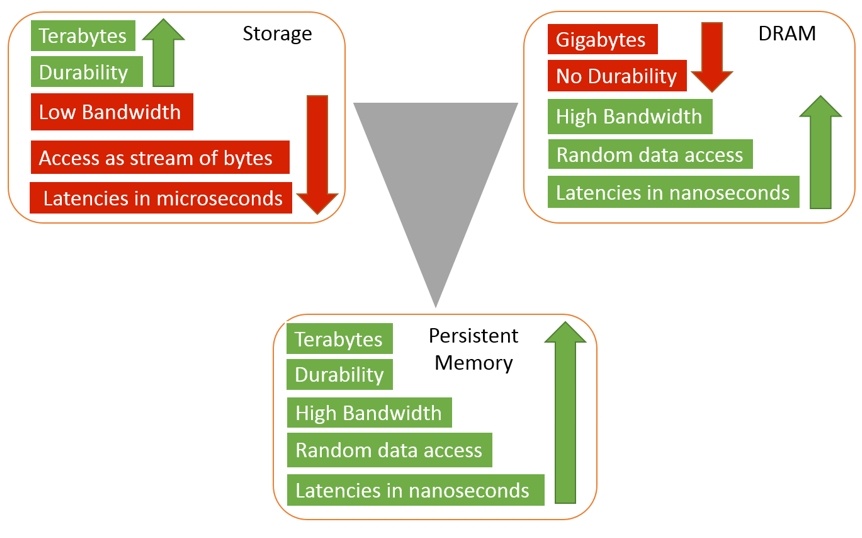 What is Persistent Memory?

Developers program persistent memory like regular memory, but it persists like storage. The Persistent Memory Development Kit (PMDK) is an open-source C/C++ library that can be used to write applications that take advantage of persistent memory. The Persistent Collections for Java* (PCJ) library extends its scope to Java-based applications such as Apache Cassandra*, Apache Spark*, and Apache Ignite*, to name a few. 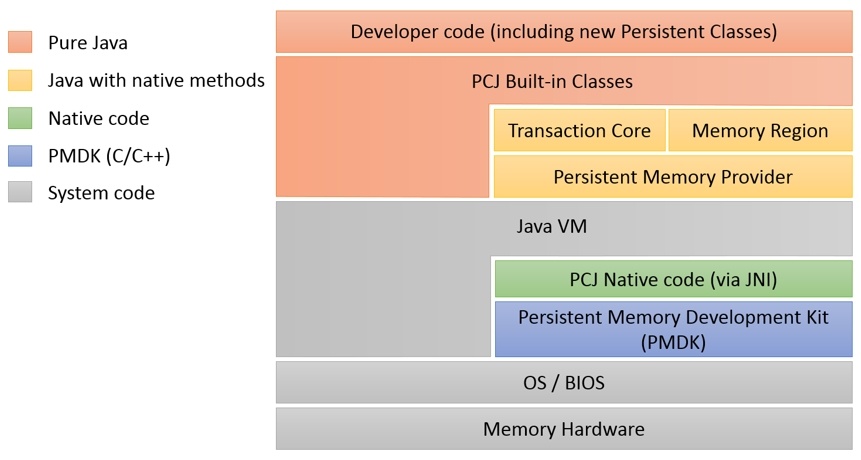 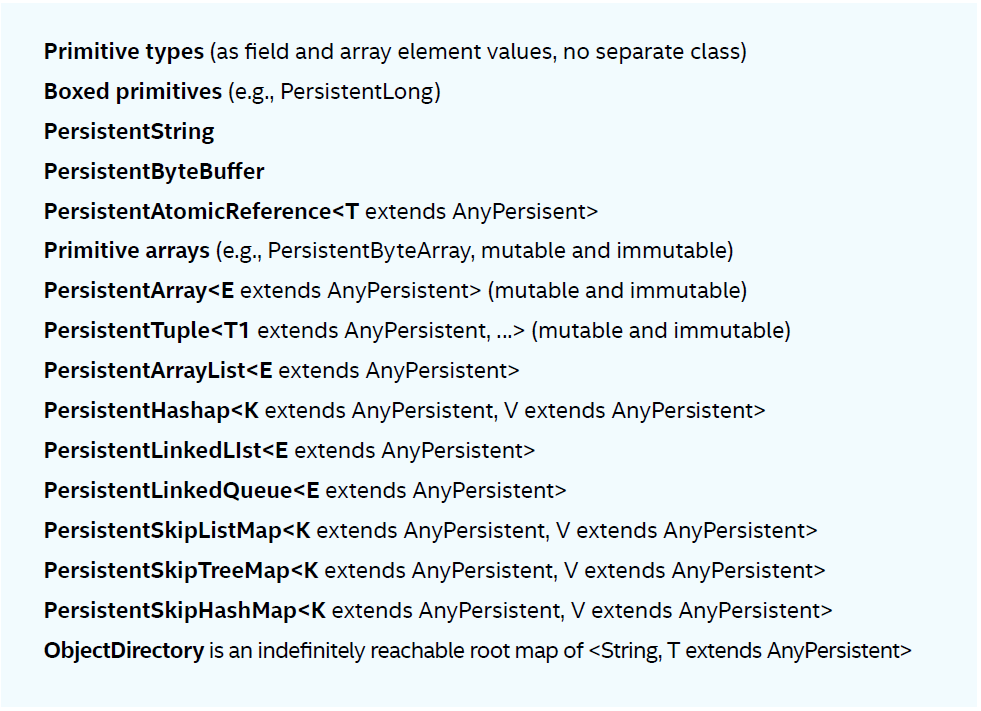 Figure 4 shows a code snippet demonstrating how to use the PCJ library to allocate and store data in persistent memory. 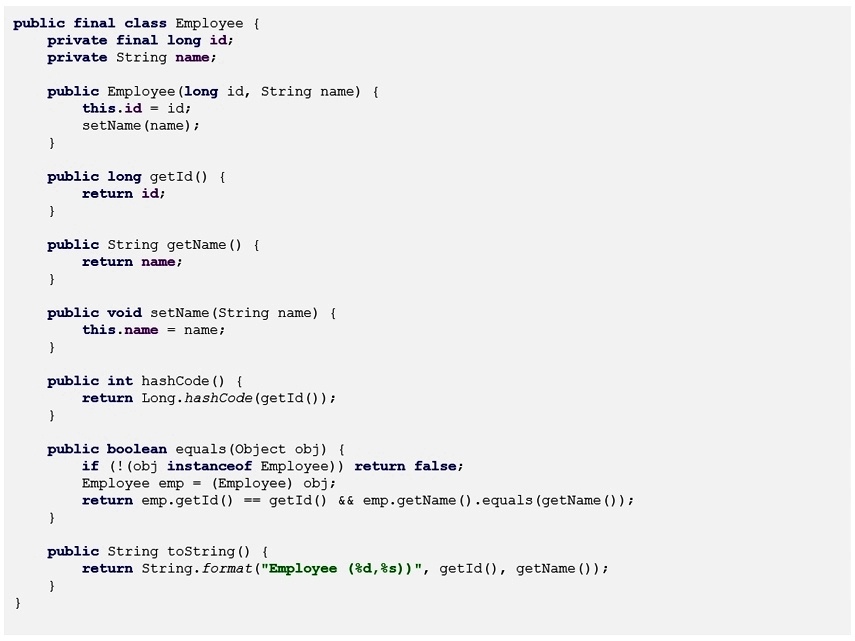 The PCJ library enables Java developers to write high-performance applications that manipulate large amounts of persistent data in a natural way. While new applications can include PCJ functionality in the design process, existing applications must be retrofitted to use persistent memory.

Figure 7 – Transactions with the PCJ 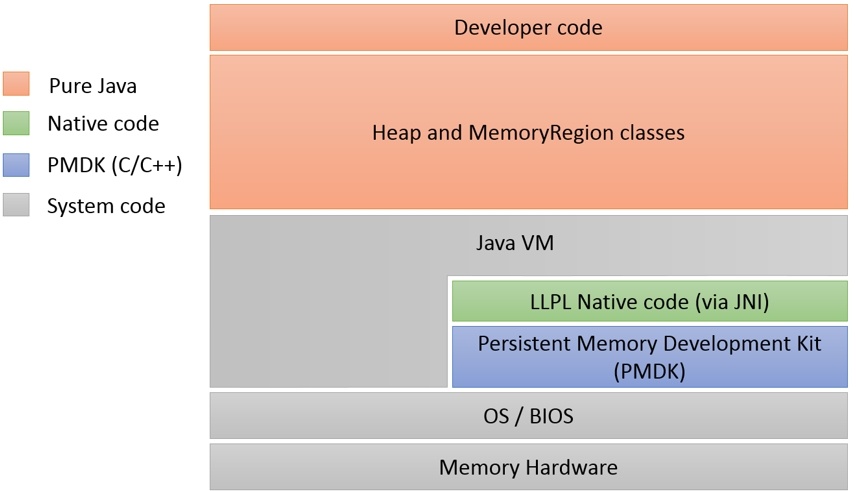 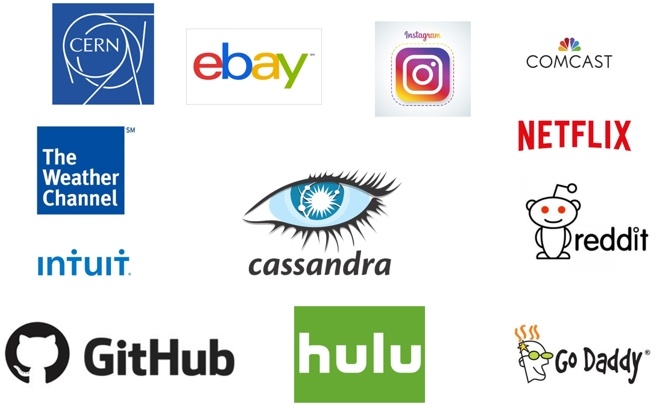 The primary goal of these optimizations is to reduce the number of disk IOs, since a large number of disk IOs can significantly hamper throughput and increase latency under a heavy load. Persistent memory eliminates the disk storage requirement. Intel developed a proof-of-concept version of Cassandra to demonstrate how the overall software stack can be greatly simplified by using the PCJ library. With this library, data can be stored in an object layout format directly in persistent memory.

The existing underlying storage mechanism in Cassandra is based on the log-structured merge-tree (LSM tree) data structure that employs multiple levels to organize the data in the form of key-value pairs. The data at each level is sorted on keys and migrated across these levels using merge sort. Each key has a row associated with it. Figure 10 demonstrates a simple version of an LSM tree with two layers in the context of Cassandra. The Memtable (an in-memory buffer to hold the data until it’s full and eventually gets flushed to disk) at level-0 is stored in the DRAM, where the data is sorted by keys. Once the Memtable has reached its configurable size threshold, the data is flushed to disk in the form of sorted string tables (SSTables, an on-disk immutable file that gets generated from the Memtable flush) at level-1.

SSTables are immutable by nature, so multiple SSTables can have different versions of a row as a result of multiple writes to the same key. The write operations are efficient in this scheme, since the client is returned a response as soon as the data is written to the Memtable without the need to wait for flushing to the on-disk level-1 storage. However, the gradual increase in the number of SSTables holding multiple versions of the same row can lead to high read latencies, since multiple on-disk SSTables will need to be read to generate the latest, accurate response for a client. Also, it may lead to inefficient disk utilization, since the stale pieces of data continue to reside on the disk due to immutability.

To mitigate the eventual drop in read performance, and to reclaim disk space, Cassandra uses a background process known as Compaction. The primary job of Compaction is to merge one or more SSTables into a single new one (Figure 11). It merges keys by combining columns and retaining the latest copy of the data. It also discards tombstones (a special value written for a key to indicate that it has been deleted), which reduces the overall size of the data in the new SSTable. By recurrently running Compaction, both the read latency and disk capacity are regulated in Cassandra. However, Compaction can still be a CPU-intensive task that can often result in unpredictable latency spikes. 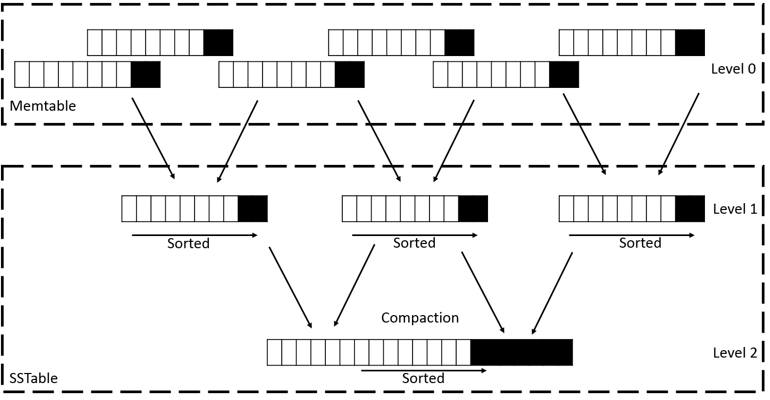 The persistent-memory-enabled Cassandra prototype developed using the PCJ library allows a mutable data structure (PMTable) to be stored in persistent memory. In contrast to the serialized on-disk SSTables, the mutable PMTables can store data directly in the form of objects and fields (Figure 12). This provides several benefits. Because PMTables are mutable, data is written or updated in place and only the latest version of a row is retained―so the latency to read the data remains consistent. Since the data is stored in an object layout format, there is no serialization and deserialization overhead. The keys can be used to look up the data in the PMTable that resides in persistent memory without any disk IO overhead. This scheme also removes the overhead of Compaction, since no data merging is required due to in-place updates. Disk-based optimization features (i.e., bloom filter, index, caches, etc.) are no longer required―which simplifies the read path and delivers more predictable outlier latencies. The current prototype is limited in terms of the features it offers. Intel is working with the Apache community to open-source this prototype and make it fully functional. Open Source as a Change Agent for Cloud

Find possible persistent memory errors so the system operates correctly when the power is restored.