The amount of data humans produce every day is growing exponentially―and so is the need for high-performance, scalable algorithms to process and extract benefit from all this data. Intel puts a lot of effort into building effective data analytics tools for our platforms by optimizing not only hardware, but also software. In recent years, Intel has built a powerful data analytics and machine learning (ML) software and hardware stack that includes both optimized frameworks1 and libraries.2

K-means is one of the accelerated ML algorithms in IDP scikit-learn.

K-means, a popular clustering algorithm, is used in astronomy, medicine, market segmentation, and many other areas. It’s one of the accelerated ML algorithms implemented in Intel DAAL. k-means is both simple and powerful. Its objective is to split a set of N observations into K clusters. This is achieved by minimizing inertia (i.e., the sum of squared Euclidian distances from observations to the cluster centers [centroids]). The algorithm is iterative, with two steps in each iteration:

Repeat these steps until one of the following happens:

Different initialization methods are used to get initial centroids for the first iteration. It can select random observations as initial centroids, or use more complex methods such as k-means++.10

To show how well Intel DAAL accelerates k-means, we compared it to RAPIDS cuML, which claims to be 90x faster than CPU-based implementations.11 We also compared cuML to scikit-learn from IDP, which uses Intel DAAL underneath.

We chose the maximum number of c5.24xlarge instances to be eight because the cost per hour of eight c5.24xlarge instances is approximately the same as one p3dn.24xlarge instance. We used a synthetic dataset with 200 million observations, 50 columns, and 10 clusters, which is as much as the V100’s memory can store. A similar dataset with 300 million observations instead of 200 caused a RAPIDS memory error (RMM_ERROR_OUT_OF_MEMORY). CPU-based systems can typically process much larger datasets. (The code for dataset generation is shown in the Code Examples section at the end of this article.)

We chose the same initialization method in all measured cases for an apples-to-apples comparison, and we chose the float32 datatype since it gives sufficient accuracy and fits in memory.

Figure 1 and Table 1 show that starting from four Intel Xeon Scalable processor nodes, Intel DAAL outperforms cuML on eight V100 GPUs. Even one node with two Intel Xeon Scalable processors is only 40% slower than eight V100 GPUs. Also, it can hold and process the whole dataset, while fewer than eight V100s can’t. IDP scikit-learn and Intel DAAL on one CPU node show approximately the same results: the difference in training time is trivial, and due to Intel DAAL function call overhead.

The k-means algorithm converges to the same result for all measured cases. Inertia is 4×108. The IDP scikit-learn and Intel DAAL examples are available in the Code Examples section. Moreover, we calculated the k-means training cost as the cost of instances on AWS EC2 multiplied by the training time for eight Intel Xeon processor nodes and eight V100 GPUs, respectively.

Figure 2 shows that using Intel DAAL with eight CPU nodes results in up to 2.64x reduction in k-means training cost. 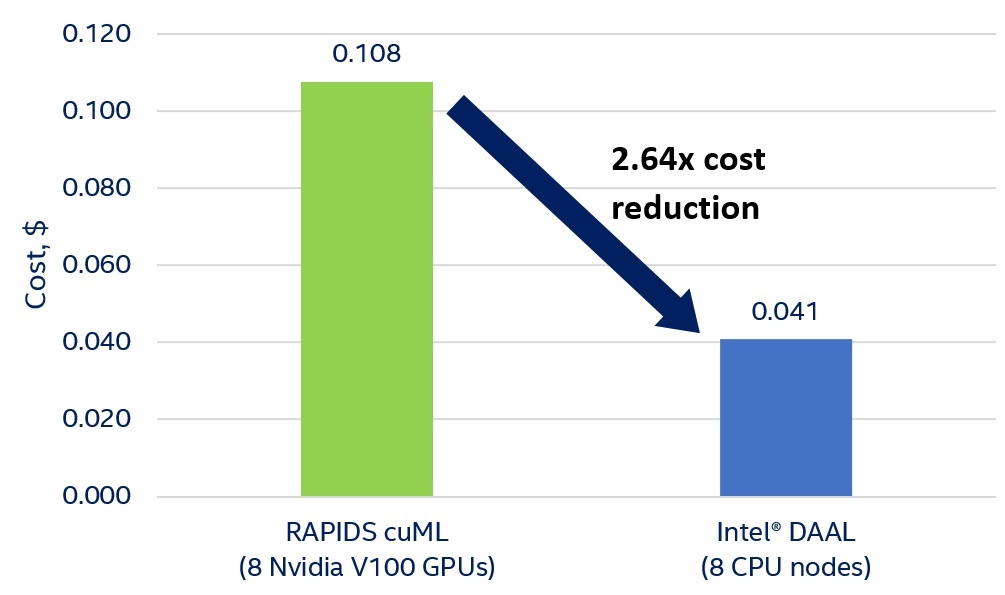 With the oneAPI programming model,9 Intel delivers high performance, not only on the CPU, but also on its coming architectures (discrete GPU, FPGA, and other accelerators). oneAPI is delivering unified and open programming experience to developers on the architecture of their choice without compromising performance. Intel DAAL is a part of the oneAPI Beta release. You can try it in the Intel® DevCloud development sandbox.14

The k-means algorithm is based on computation of distances, since it’s used in cluster assignments and objective function (inertia) calculation. The distance in d-dimensional Euclidean space between an observation s = (s1, s2, …, sd) and a centroid c = (c1, c2, …, cd) is described by the following expression:

This is equal mathematically to: 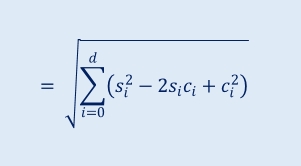 Thus, the squared distance is:

To calculate squared distances, the k-means implementation in Intel DAAL splits observations into blocks of fixed size and then processes them in parallel using Threading Building Blocks.15

can be presented as an element mjn of matrix M = 2 S × C, where j is an index of an observation in a block, n is an index of a centroid, and S and C are matrices of a block of observations and centroids, respectively. To calculate this matrix of distance components, Intel DAAL uses matrix multiplication from Intel MKL.16

is constant and can be calculated only once for each observation, while two others (

) should be recalculated at each iteration.

The best way to install scikit-learn from IDP or daal4py (the Python interface for Intel DAAL)18 is by creating a new conda environment:

Running k-means with scikit-learn from IDP:

Machine Learning 101 with Python and daal4py

Supercharge applications and speed up core computational packages with this performance-oriented distribution. Powered by Anaconda*.