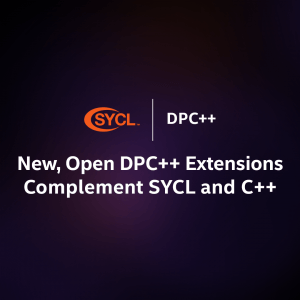 In decades past, the notion of “one workload, one processor” was the conventional wisdom. Today though, that legacy perception falls to the wayside with the rise of heterogeneous computing. The latest technologies can now provide the exceptional speed and scalability levels necessary to usher in an era of high-performance computing (HPC), artificial intelligence (AI), advanced rendering, and Internet of Things (IoT) systems. While this evolution creates enormous opportunities across the industry, it also comes with application development challenges. The industry is responding with the oneAPI initiative to facilitate software development productivity while delivering performance across different architectures.

Data-centric workloads and applications have continued a path of diversification in recent years. Different hardware choices have separate silos of tools and development languages. Proprietary solutions and the variety of development languages limit the amount of “reusable” code. Data Parallel C++ (DPC++) offers an evolution of ISO C++ to help alleviate that issue. It will increase coding productivity and change the paradigm for programming across diverse architectures. oneAPI, with DPC++ (its primary language), will make the process much easier.

Open specifications are critical. Without them, developers cannot predict a language’s evolution over time and its future compatibility. Therefore, innovation requires open development. When “walled gardens” are in place, innovation stagnates. The walls also restrict performance across architectures. C++ is a broadly adopted and robust language. However, it has some limitations since it has been defined primarily with only CPUs in mind. Today’s standard cannot accommodate heterogeneous programming without additions.

The Khronos Group led the innovation of OpenCL™, enabling low-level and detailed programming across multiple architectures. Over time, though, members of the OpenCL™ consortium developed their own extensions—the standard effectively diverging—and proprietary languages held sway. Based on the OpenCL™ experience, the Khronos Group innovated to simplify the process further with the SYCL programming model. Like OpenCL™, it supports heterogeneous programming, but uses standard C++ constructs with single-source host and accelerator code.

Said Joe Curley, senior director for oneAPI products at Intel, “Accelerated computing has diversified over the past several years given advances in CPU, GPU, FPGA, and AI technologies. This innovation drives the need for an open and cross-platform language that allows developers to realize the potential of new hardware, minimizes development cost and complexity, and maximizes reuse of their software investments.”

DPC++, a cross-architecture language that is part of the industry’s oneAPI initiative, complements existing efforts to ease the heterogeneity challenge. DPC++ combines three elements—C++, SYCL, and extensions—to facilitate cross-architecture systems. It also serves as a standards-based language implementation that opens the door to introduce new features to future revisions of the SYCL specification. Intel, as a key participant of that effort, is also building implementations of oneAPI.

Joe Curley reinforced the commitment to openness in the language. “DPC++ builds on open standards: C++ and SYCL. But the language also provides the ability to rapidly experiment and innovate through extensions, develop them, and establish a virtuous cycle into open standards bodies — like Khronos SYCL. DPC++ provides an open mechanism for the developers to evolve data parallel programming rapidly.”

Although it is still in beta, DPC++ offers nearly 30 new extensions to augment tools currently available. The provisional SYCL2020 specification incorporates many of them:

“We’ve been working closely with Intel on defining oneAPI and using oneAPI for our own internal development and testing,” explained Hal Finkel, Lead for Compiler Technology and Programming Languages at Argonne National Laboratory’s Leadership Computing Facility. “oneAPI provides extended capabilities, such as supporting unified memory and reductions, above what is available in the current SYCL 1.2.1 specification, and these capabilities are essential for us. Our development of a Kokkos backend for DPC++/oneAPI, for example, relies on these additional features. We’re looking forward to updates to the SYCL specification, which we trust will contain important new features from DPC++ that address specific needs identified during these development activities.”

Added Joe Curley, “In only a few months, the DPC++ community has made enormous progress in both language design, architecture, and implementation. We encourage the community to join in the effort to open accelerated programming.”

Intel technologies may require enabled hardware, software, or service activation. No product or component can be absolutely secure.

Your costs and results may vary.

Intel does not control or audit third-party data. You should consult other sources to evaluate accuracy.

Intel disclaims all express and implied warranties, including, without limitation, the implied warranties of merchantability, fitness for a particular purpose, and noninfringement, as well as any warranty arising from course of performance, course of dealing, or usage in trade.

The products described may contain design defects or errors known as errata that may cause the product to deviate from published specifications. Current characterized errata are available on request.

Performance varies by use, configuration, and other factors. Learn more at www.Intel.com/PerformanceIndex.