Scan (also known as inclusive/exclusive scan, prefix sum, or cumulative sum) is a common operation in many application domains1. As such, it is defined as a standard library function in C++, the OpenMP runtime, and the Python* NumPy package2,3. A scan of a vector is another vector where the result at index i is obtained by summing all the values up to index i (for inclusive scan) and i-1 (for exclusive scan) from the source vector. For instance, the inclusive scan of vector x with n elements is obtained by: 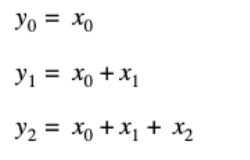 And generally defined as:

We will be demonstrating inclusive scan, henceforth referred to simply as scan. We’ll begin with a brief overview of SIMD, also known as vectorization, followed by a baseline implementation of the scan operation in C and with OpenMP directives. Next, we’ll implement an optimized scan algorithm in SIMD operating on 512-bit vector registers. We’ll conclude with performance comparisons of the baseline and optimized implementations.

SIMD instructions operate on wider vector registers that can hold multiple data operands. The width and the number of vector registers are architecture-dependent, with the latest generation of Intel processors supporting 32, 512-bit-wide vector registers. Intel provides x86 ISA extensions in the form of Advanced Vector Extensions (AVX), AVX2, and AVX-512 that allow various arithmetic and logical operations to be performed on the 256-bit- and 512-bit-wide registers, respectively. Depending on the width of vector register, they are named XMM, YMM, or ZMM (Table 1).

The tradeoffs of these approaches are summarized in Table 2.

The baseline code for computing the scan of a vector is shown below, followed by the Intel compiler optimization report (generated using the -qopt-report=5 compiler option). The scan operation has inherent loop-carried dependencies, so the compiler is unable to fully vectorize the computation.

The same operation with the addition of OpenMP directives is shown below, along with the compiler optimization report. OpenMP is a portable, directive-based parallel programming model that includes SIMD support. The SIMD construct (combined with the reduction clause and scan directive) can be used to perform a scan operation on the vector. (We refer the reader to the OpenMP specification, which provides good documentation6,7.) Because we are interested in understanding the impact of SIMD on workload performance, we are not parallelizing the loop, but instead limiting the OpenMP directives to vectorization only. The compiler optimization report shows that vectorization was performed using a vector length of eight (i.e., AVX-512) and that the loop was unrolled by a factor of 16 elements. 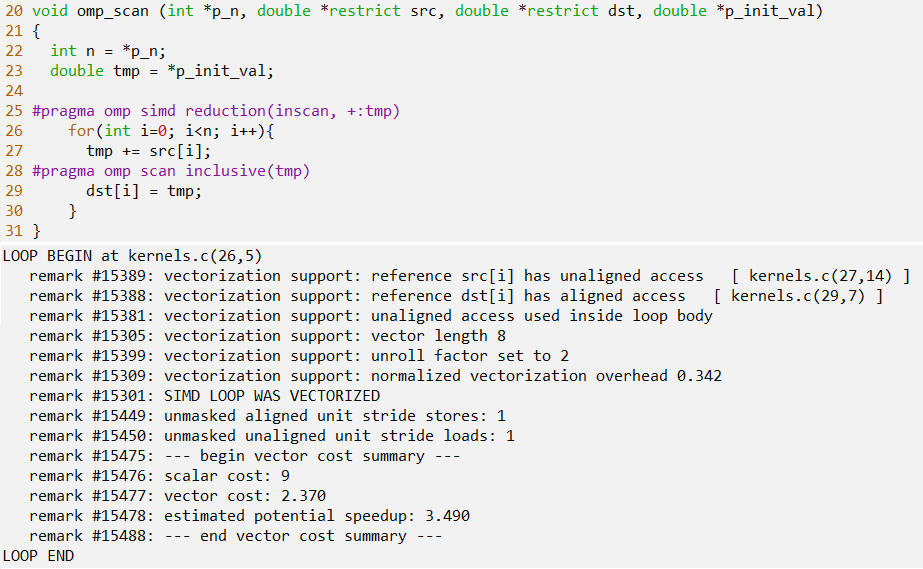 We will compare the baseline and auto-vectorized variants to the explicit AVX-512 SIMD implementation described in the next section.

In this section, we demonstrate the SIMD techniques to optimize the vector scan operations on Intel processors that support AVX-512 execution units. We will be using the double precision floating point (FP64) datatype for input and output vectors. The AVX-512 SIMD instructions used in our implementation are shown in Table 3.

The main idea behind our implementation is to simultaneously perform a series of add operations in the lower and upper 256-bit lanes of the 512-bit register after applying the necessary shuffle sequence. For every eight input elements, we perform a total of five adds and five permutes. All the add operations form a dependency chain because we are accumulating the results in a single register. However, some of the permutes are independent of the add, so they can be executed simultaneously. Figure 1 shows a visual representation of the implementation, followed by the code showing the main loop block where we are processing 16 elements per iteration. 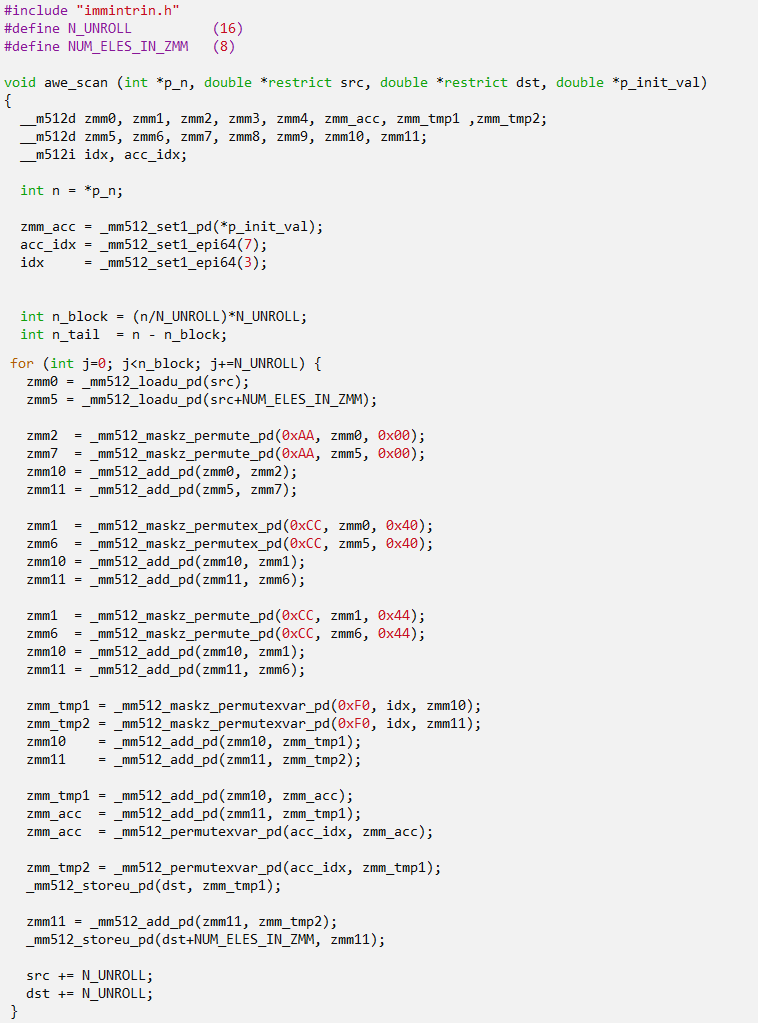 We evaluate the performance between the three versions of scan implementations on a single core of an Intel® Xeon® Platinum 8260L processor. The GCC (v9.3.0), Clang (v10.0.1), and ICC (Intel® C++ Compiler, v19.1.3.304) compilers were compared for the baseline, OpenMP SIMD, and explicit AVX-512 SIMD implementations. Table 4 shows the assembly code generated by ICC for the main block of each implementation.

We observe that for the baseline code, the loop is unrolled by only two elements, and both scalar add operations form a dependency chain. This is inefficient because the generated code is not exploiting the wider AVX-512 execution units.

The OpenMP SIMD implementation is more interesting because the generated code uses AVX-512 add and permute operations and is unrolled by 16 elements. There are total of eight adds, eight permute, and two broadcast instructions to process 16 input elements. For a set of eight elements, the add and permutes form a dependency chain (highlighted in red). In addition, all the permutes generated in this version of the code shuffle elements within 256b lanes. Permutes that shuffle elements within a 128b lanes have lower latency (one cycle) than permutes that shuffle within 256b lanes (three cycles).

Our explicit AVX-512 SIMD implementation is also unrolled by 16 elements, and uses 11 add and 10 permute instructions to process those 16 elements. Even though we use greater number of add and permute instructions compared to the OpenMP SIMD scan, it has two advantages. First, four out of ten permutes are within a 128b lane (one-cycle latency), and hence are more efficient. These four permute instructions are highlighted in green. Second, some of the permutes are independent of the add instructions. This helps by providing more instruction-level parallelism and more effective utilization of AVX-512 execution units. We do an extra add to compute the accumulation result as soon as possible. This puts more concurrent instructions in flight and mitigates stalls in the execution pipeline for future iterations.

Figure 2 shows the performance for vector sizes ranging from 64 to 1,024 elements in steps of 32 and with all vectors residing in L1 cache. We can make the following observations from the performance data:

Making the Most of Intel® Compiler Optimization Reports

Delving into the Mysteries of OpenMP Vectorization Support

Compile ISO C++, Khronos SYCL*, and DPC++ source code across CPUs, GPUs, and FPGAs. Part of the Intel® oneAPI Base...