An Introduction to the Reduction Operation

Reduction is a common operation in parallel programming that reduces the elements of an array into a single result. Let’s say we want to add the elements of a large array into a single sum (Figure 1). Doing this operation in parallel requires the computation of partial sums that are sequentially combined, or reduced, to produce the final result. Reduction operators (e.g., summation, minimum, maximum, minimum location, and maximum location) are associative and are often commutative. There are many ways to implement a reduction, and its performance depends on the underlying processor architecture. This article explores several ways to express reductions in Data Parallel C++ (DPC++) and discusses the performance implications of each.

In the following implementation, each work-item in the DPC++ kernel is responsible for an element of the input array and atomically updates a global variable:

Depending on the number of threads created by the compiler (which in turn depends on the default workgroup and sub-group sizes chosen by the compiler for the target device), the contention for accessing the single global variable, sum_buf, will be quite high. In general, the performance of such a solution will not be very good.

One way to reduce the contention on the global variable update is to decrease the number of threads accessing this variable. This can be achieved by making each work-item process multiple elements of the array, perform a local reduction on a chunk of elements, and then perform the global atomic update (Figure 2).

This implementation is shown in the following code: 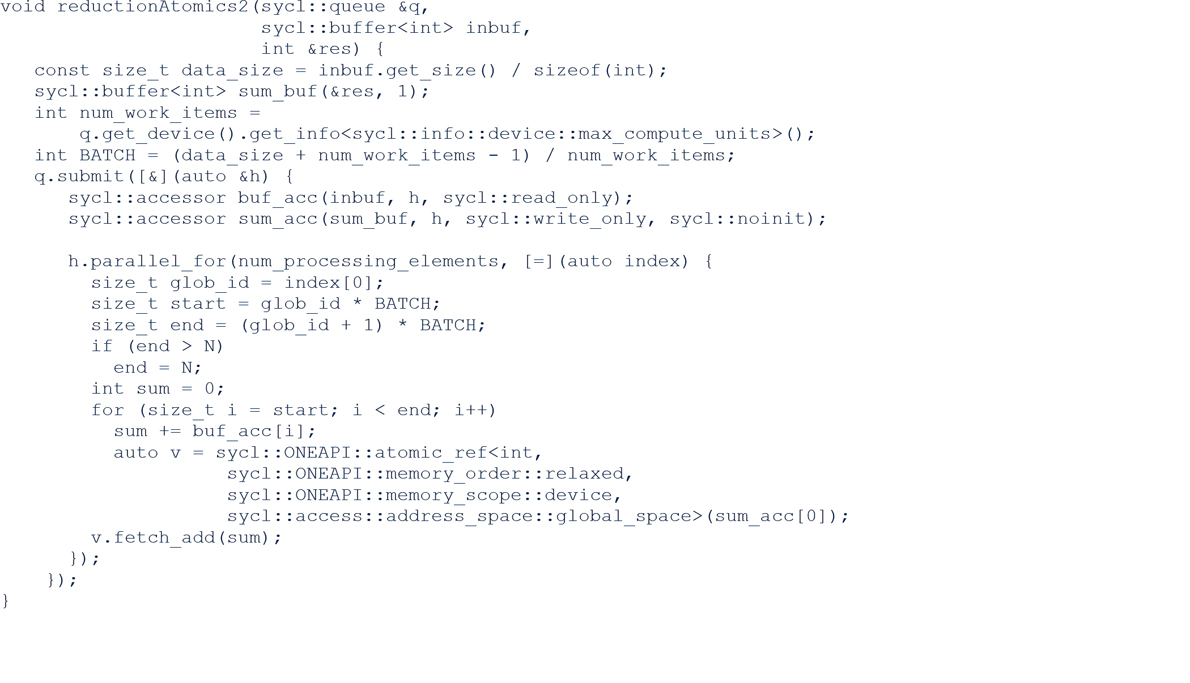 The DPC++ compiler maps each work-item to a vector lane of the underlying processor, which allows the compiler to generate efficient code when the work-items access memory locations with a stride greater than the vector length of the processor. This access pattern is shown in Figure 3, where each of the labels wi-1 … wi-n represent each of the n work-items.

The kernel where each work-item operates on multiple, interleaved elements of the input vector is shown in the following code:

A tree reduction is a popular technique in which each of the work-items in a kernel apply the reduction operator to adjacent elements, producing intermediate results with multiple levels. This can be applied within a work-group, as shown in Figure 4, because thread scheduling and synchronization are highly efficient, with hardware support within a work-group.

The size of a work-group is fairly small (about 256 or 512) and is dependent on the hardware device, while the number of elements to be reduced is an order of magnitude larger than the work-group size. This means that the reduction operation performed by each work-group produces an intermediate result that needs to
be further reduced. This can be handled in two ways:

DPC++ provides a summation reduction operator, which is used in the kernel below. In this case, the compiler chooses an implementation that is the most efficient for the underlying platform. It is usually recommended to use the built-in reduction operator.

Reduction is a common parallel programming pattern used in many applications. In this article, we explored some ways of implementing this operation in DPC++. The performance of these implementations can be quite different depending on the compiler and the target platform. My next article will explore the performance of these kernels on CPUs and GPUs.